A Case Against Prescription Drug Abuse

Why You Need to Think Twice Before “Borrowing” that Adderall

Americans have a habit of sharing prescription pills.

For some, it might be taking a friend’s Adderall to help study for an exam. For others, it could be using a painkiller prescribed to a family member to cure their own pain. The rationale is often the same: “The doctor would have given me the same medication, right?”

Borrowing medication is a dangerous activity for multiple reasons. Self-medicating can lead to more serious medical problems and, in some cases, even death.

Borrowing is just one of the many ways people abuse prescription drugs. For example, people often take a few extra painkillers (on top of what is prescribed) to treat stubborn back pain, while others go out for drinks while taking a medication that doesn’t mix well with alcohol.

Below, we’ve provided some information on the dangers of prescription drug abuse, in honor of Red Ribbon Week:

1. It’s Dangerous to Your Health

The most direct problem with prescription drug abuse is the health risk. Abusing drugs often causes adverse health effects. For instance, opioids can lead to mood swings, decrease in cognitive function, choking, slowed breathing, changes/interruptions in the menstrual cycle, and infertility. In rare cases, opioid abuse can lead to severely slowed breathing, which could cause a coma or even death.

With CNS depressants, you’re at a higher risk of memory issues and seizures. Some stimulants, even when used briefly, can trigger paranoia. Heavy use can raise the body’s temperature and cause abnormal heartbeat. Cardiovascular problems and fatal seizures may also arise.

A recent study found that prescription pills have been causing more car accidents than alcohol and marijuana. Especially if you abuse these drugs, they may interfere with your ability to manage your motor skills.
It’s not just car accidents, either. Working construction, operating heavy machinery, or taking part in any high-risk activity can be more dangerous when abusing prescription medication. 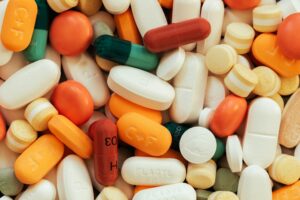 Some of the prescription drugs are already addictive in their appropriate use. When abused, the risk of addiction increases exponentially. Addiction leads to craving which inevitably results in tolerance which in turn leads to even heavier use.

At this point, discontinuing the medication can cause withdrawal symptoms. Withdrawing from opioids, for instance, causes bone pain, vomiting, insomnia, uncontrolled leg movements, and other symptoms. Discontinuing stimulants can result in sleep problems, exhaustion, and depression.

Did you know that it’s illegal to take medication not prescribed to you? That’s why a pharmacist won’t give you a sleeping pill unless you have a written prescription from a doctor or nurse practitioner.

A Note on Controlled Substances

A controlled substance is a drug that can cause a detrimental effect on the user. That’s why state and federal governments have deemed it fit to regulate the substance. If caught, people in possession of such substances risk fines and time in jail.

It Can Start Early

Prescription drug abuse is common among college students. If you’re a student, self-medicating to boost your performance, ease anxiety, or enjoy social gatherings often ends up having the opposite effect––especially if you get addicted.

Whatever your motivation, misusing prescription drugs has consequences that far outweigh the benefits. If you believe you need prescription medication, please only do so after consulting a doctor.