Coronavirus Antibody Test… How Accurate Is It? 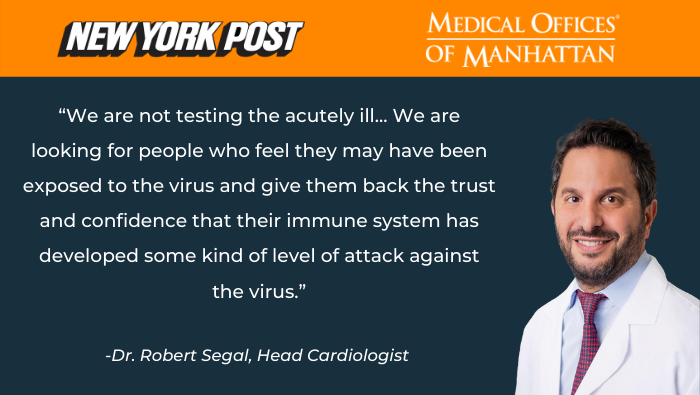 Medical Offices of Manhattan’s Internist, Dr. Robert Segal speaks to The New York Post about the coronavirus antibody test and how accurate it may be.

Cardiologist Robert Segal has been conducting antibody tests at his Manhattan Cardiology clinics on the Upper East Side and Midtown since April 16 “for anyone who has felt that they had exposure to the coronavirus,” he told The Post. He said he’s already tested more than 200 people and is fielding 400 requests a day for the antibody test.

The test itself costs $95, but the price goes up to $299 with pre-screening and administration, Segal said. He is opening up another clinic in Columbus Circle to handle the overflow, he noted. The tests, which are covered by insurance, are set up through LabFinder.com, a platform he co-founded that prescreens candidates before they show up for the blood draw.

“We are not testing the acutely ill,” Segal said. “We are looking for people who feel they may have been exposed to the virus and give them back the trust and confidence that their immune system has developed some kind of level of attack against the virus.”

Segal’s tests have been self-validated and the manufacturer, Diazyme Laboratories, has been authorized by the FDA to produce and market the tests under emergency protocols in place during the coronavirus pandemic, his spokeswoman told The Post.

Unlike some serology test kits that rely on a “pin-prick” sample of blood and feature almost instant results, Segal’s clinics use a vial of blood that is analyzed by a lab. Results take up to 72 hours and are 95 percent accurate, he claimed. “There is a 5 percent false-positive rate which in my world is not dangerous,” Segal said. “Most lab tests have a 5 percent false-positive rate.”

Segal stressed that the tests are not showing full immunity to COVID-19, but the indication of antibodies in the blood that might possibly guard against re-infection and infecting others.

Segal and others also hope that those with COVID-19 antibodies will be in a position to donate “convalescent plasma” to help those stricken with the coronavirus fight the disease. The United States has already treated 500 people with convalescent plasma, conducting clinical trials at 1,500 hospitals across the country. Clinical trials are also underway at hospitals around the world to determine whether plasma transfusions could improve a patient’s recovery and help them survive.

View the original piece placement on The New York Post.