When To See A Doctor For A Cold 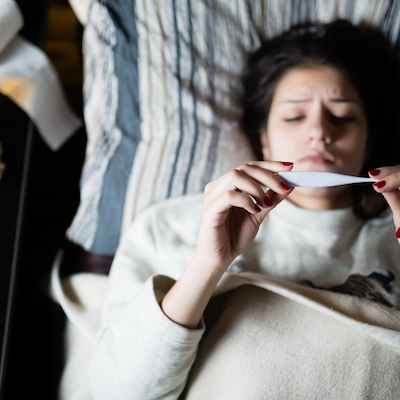 Starting to get the sniffles? Maybe a scratchy feeling at the back of your throat? You know the symptoms of the common cold – you’ve obviously had them before. Like most people, you probably get sick on average two or three times a year. If it’s just a runny nose, it might not be that big a deal, but when your symptoms are making you miserable and seem to be lasting forever, you might start contemplating whether or not you should see a doctor.

We can certainly understand why you might be hesitant to see a doctor. You’ve also been sick before, so you might decide that you can stick it out this time around too. A visit will at least cost you a co-pay. Not to mention how hard it can be just to get out of bed when you’re feeling really crummy. Sooner or later you’ll get better on your own, right?

Should I Go To The Doctor For A Cold?

Cold and flu symptoms are nearly identical, and it can be difficult to distinguish one from the other early on. Remember: just because you’ve gotten a flu shot this year doesn’t mean you can’t still get the flu. Flu shots help with prevention, but will not give you 100% immune to the flu. Many doctors consider the flu to be a cousin to the common cold with more severe versions of similar symptoms. They can also have similarities to many other illnesses, so it can be difficult to be sure when your chicken noodle soup isn’t going to cut it and you need to seek out professional advice.

Pay attention to your symptoms and how long you’ve had them.

The following are some indicators of when to see a doctor for a cold:

If your cold symptoms aren’t getting better

Generally, your symptoms should begin to recede within the first week. You might still have a lingering cough or the sniffles, but after seven days you should be feeling much better than when you first got sick. If symptoms persist with little change in severity for over 2-3 weeks, the issue may be something other than a common cold. You may have a sinus infection or even pneumonia. Consult a doctor to find an alternative treatment approach. A fever of 100.4+ degrees that lasts more than three days could also indicate a more serious infection.

If you have a chronic health condition

Greater caution may be necessary if you’ve already been diagnosed with a chronic health condition like diabetes, hypothyroidism, or heart disease. Even a minor cough or case of the sniffles may be worth bringing up with your doctor. It’s unlikely to be anything of serious concern, but even a minor cold can be worse when combined with another health issue. Better safe than sorry! Getting the right diagnosis and treatment right away can help you avoid further complications that could come with ignoring your symptoms.

If you have severe headaches

Headaches happen even when we’re not sick, and sinus headaches are very common when you have a head cold. However, if you’re experiencing intense headaches that affect your ability to concentrate or complete your daily tasks, it may be a symptom of a more serious illness than a cold or flu. If you’re having extreme headaches and lightheadedness, it may be a sign of a central nervous system disorder such as meningitis. You should visit a doctor to have these symptoms checked out immediately.

When your cold symptoms become unmanageable

Being sick is never a fun experience, but you shouldn’t just try to suck it up and muddle through if you’re feeling absolutely miserable. If your cold is keeping you up all night coughing and sniffling and over-the-counter medications don’t seem to be doing anything to help, it’s time to visit your primary care doctor. Listen to your body. You know how it usually feels when you’re sick. If you’re feeling unusually terrible, don’t feel like you have to tough it out. Sometimes pounding Emergen-C and chicken soup just isn’t going to cut it. Remember that your doctor is there to help!